Upper School Latin teacher Randy Fields treated his Honors Latin IV class to lunch at It’s Greek To Us to learn about Greek culture, study the language, and enjoy some gyros and baklava. On November 17, the class of 11 students loaded up a mini bus for the trip to the authentic Greek restaurant on Church Street. It’s Greek To Us is right next to Zaxby’s and is less than a ten minute drive from Walker. On the “Fields’ trip,” the class tried everything from hummus to Greek potatoes to meat kabobs.

Junior, Addison Tharp said, “the best part of our lunch was becoming a better scholar while eating authentic Greek food. Also, junior Kendall Baker said that “the kabobs were superb.’

Every time G Block is the last class of the day, one can find Fields teaching his dedicated Latin scholars the basics of the Greek language. Fields’ believes that understanding Greek can translate into his students having a better understanding of the Latin and English languages. The class started off learning the Greek alphabet and has moved on to sentence structure and translations. 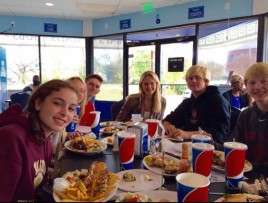