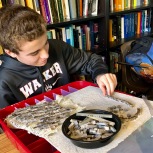 Matthew Waibel places tiles in a line to create his design

When freshmen returned to Walker after Christmas Break, they traded English and history textbooks for the unique experiences of Winterim classes. One course offered was Piece by Piece, a mosaic-making class led by Mr. Fields, Latin teacher and head of the World Languages department. Mr. Fields recommends the class if you have a “passion for art, an interest in the classical world, or a curious disposition.” Grace Sawyer says she signed up because she enjoys hands-on activities and wanted to try a new craft that she doesn’t have the opportunity to make anywhere else.

The students researched Greek and Roman mosaics and used ancient techniques to recreate the mosaic of their choosing. After selecting colors and patterns, they used tile nippers to shape the tile, then added paste to the backs and attached them to slabs to form designs. Students created mosaics of dogs, fish, and many other creatures.

When asked about the course, Maddie Meyers explained that her favorite part was “creating the mosaics while hanging out with friends.” Megan Duckworth described the class as “So much fun!” Students obviously learned a lot in “Piece by Piece”, and since feedback was so positive, this class will likely be offered again next year.