This year, Walker welcomed Mississippi native, Trey Veazey, as the new Assistant Head of the Lower School. Alongside his administrative position, he teaches three fourth grade Literature classes with focuses in vocabulary and reading fluency. 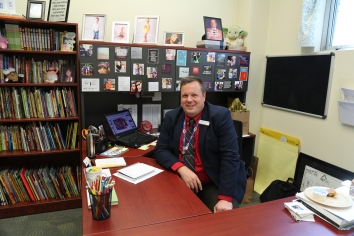 After moving around as a child, Mr. Veazey graduated from New Hope High School in Columbus, Mississippi. He completed his undergraduate at the University of Southern Mississippi, acquired his first graduate degree at University of Mississippi, where he met his wife, and obtained his ED Specialist at LSU. Mr. Veazey received several certifications which allow him to explore all areas of teaching, and is currently planning to finish his doctorate somewhere in Georgia.

Mr. Veazey can recall thinking in kindergarten that he was going to be a teacher, a profession which he finds very rewarding. Prior to Walker, he taught students ranging from pre-k, first, third, and fifth grades, with his most recent job as the librarian at Glen Oaks Park Elementary School in Baton Rouge, Louisiana. His time at Glen Oaks was accompanied by the Baton Rouge flood, which destroyed the school, and to his dismay, the library. With all the books gone, Mr. Veazey wrote a blog post called “A Cry for Help, or 1,600ish Words on Books, Life, and Honey Buns,” and posted it on Twitter in hopes that some authors would send a book or two. The next morning he woke up to see he had gone viral, becoming the top story on Reddit, and having people contacting him from around the world wanting to send books. He described it as “a phenomenal experience in that you really got to see humans being good to one another.” 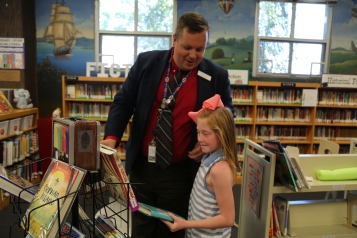 Outside of school, Mr. Veazey enjoys reading, hanging out with his children, Henry (3), and Maybelle (5), and using his movie pass as much as possible. His favorite film and book is To Kill a Mockingbird, and he considers Atticus Finch to be the greatest character of all time. He enjoys watching college football, and says that he “can die and be fine because the Cubs won the World Series.” He feels that working with children has made him both a better father and person as a whole, and noted that the very first class he taught will be graduating from Tupelo High School this year.