This year, Rick Holifield came to Walker from Pace Academy and took the job as the Assistant of the Upper School. However, he did not always want to have a career in education. He was drafted at age 18 to the Toronto Blue Jays where he played professional baseball for 10 years before owning a sports complex in Stamford, Connecticut. Owning the sports complex allowed Holifield to go back to school where he received his bachelor’s degree in theology from Life Christian University and later attended Graduate school at Harvard for education. Originally Holifield wanted to 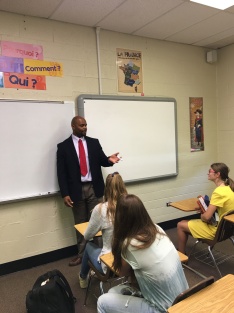 become a minister, but after meeting with the headmaster at Brunswick school, he was offered a job as the baseball coach and decided to pursue education. After staying at Brunswick school for 3 years, he transferred to St. Luke’s school where he started as the community service coordinator. His position transitioned to  the Dean of Upper School Student Life and eventually also became the Director of Multicultural Affairs. After 10 years, he began work at Pace Academy and from 2013 to 2017 he was the director of Diversity before coming to Walker. On a typical day, he attends lots of meetings, but tries to find time to engage with kids. “Aside from meetings, I have visited a few classes, and I’m going to continue to do that because I really want to get to see what our teachers do” Holifield says. When he isn’t at school he enjoys swimming,

yoga, and listening to Jazz music. “He also enjoys trips to Hilton Head with his wife and watching comedy and romantic-comedy films. During his childhood, the only vacation he ever took was a road trip in 1977 from New York City to California. Holifield would eventually move to Southern California with his aunt and uncle when he was in high school. Southern California is also the location of his favorite restaurant, Aunt Kizzy’s back porch. Although he never went into ministry, Holifield says “I often times feel like this is my ministry. I work with kids, and I was going to be a youth pastor anyway, so I’m in my sweet spot”.