“Three…Two…One!” shouted junior Peyton Ware immediately followed by the screams of over sixty students and faculty as ice cold water poured across the stadium steps. ALS or Lou Gehrig’s disease is a genetic disease that results in the death of neurons and eventual difficulty swallowing, speaking, and even breathing. In 2015, the “Ice Bucket Challenge” was created by a Boston College Alumnus to spread awareness about the disease. People had to either dump a bucket of ice water on themselves or give a donation towards an ALS foundation.Celebrities such as Lebron James and Justin Bieber participated, further promoting the event. Although not as prevalent today, some groups still hold the challenge for personal reasons.  On Friday September 1st, The Walker School conducted their third annual challenge in support of senior Candler Boland’s dad Mike Boland who was diagnosed with ALS.

Scott Cohen (’18) and Katrina Horowitz (’18) smile before the challenge.

According to Mr. Boland, seeing “things like these are huge and it’s an inspiration.” This inspiration was a mutual feeling as Head of School Jack Hall said “Oh it’s awesome fundraising to help someone we care about and it’s for a bigger cause.” The Ice Bucket Challenge, run by the Student Services Organization (SSO) has become a tradition at Walker. Started by alumnus Greg Lloyd in 2015, the challenge has grown in size each year with more and more students and teachers joining in. This year it was passed down to SSO officer Peyton Ware who coordinated the entire operation from filling the buckets to selling concessions with the rest of the SSO members.

Students get ice water dumped over their heads by their friends.

Including money made from concessions, students raised $719 for Big Mike’s Fight, the Boland’s team that participates in the ALS Walk. Most students were Challenge “veterans,” as junior Wolverine reporter Ashlyn Spencer put it, partaking in their second or third challenge such as her fellow juniors Lauren Moore and Ala Shaw. Next year hopes to have an even better turnout with new students and faculty alike. 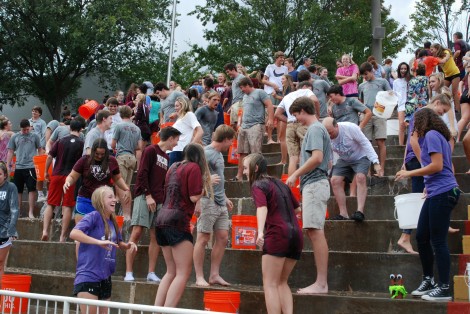