Eyes aglow with sunlight and happiness, students and teachers at The Walker School stared directly at the sun on Monday, August 21st to view the first total eclipse in the United States since 1963. Armed with homemade shirts and certified eclipse glasses, students from first grade all the way to twelfth took to Robertson Field in order to witness this once in a lifetime event.

Eclipses are in fact, actually fairly common, but totality is rarer than a partial (annular) eclipse. The last total eclipse to cross the continental United States occurred in July of 1993. They occur more than twice a year according to NASA. However eclipses approximately take 375 years for a total eclipse to reach the same location. 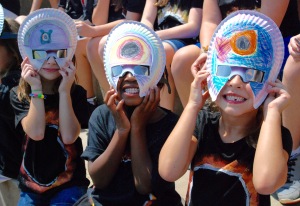 The sky grew dark, strange shadows appeared on the sidewalk, and birds stopped chirping. The outside world grew silent, and the roar of students was heard while Bonnie Tyler’s “Total Eclipse of the Heart” blared. Students of all ages eagerly awaited the arrival of the moon, including first graders Scarlett Moore and Bethany Ferguson. When asked if they were excited, both responded with a resounding “Yes!” Scarlett said, “It’s gonna be super awesome.”

Walker has also been using this experience as a chance to learn more about the eclipse. When asked, eighth grader Cooper Cranfill described the eclipse as “when the moon completely overshadows the sun.” The eclipse over Walker was seen at just 97 percent totality but was still an incredible experience; as junior Catherine Johnson said, she was a “changed woman because of it.” Sadly, it left as quickly as it came and left everyone longing for the next one. As the students headed back to class, some were still trying to comprehend what they had just seen. Johnson said, “I’ve never been more amazed,” and there was a special buzz throughout campus the rest of the day.