Happy Wednesday Wolverines, or should I say Merry Christmas! Today’s theme was the Polar Express, filling the halls with student’s dressed in their pajamas and several Christmas themed costumes.

Today’s activity was volleyball, which caused an uproar of support for each grade levels team. In the first round, seniors dominated the freshmen, sophomores beat the juniors in the second game, and freshmen won against the juniors in the final match. Unfortunately, the last round between the freshmen and seniors was cut short due to cutting into class time, so a tie was declared.

Junior Ala Shaw shows her spirit as a Christmas tree.

Seniors Summer Golden and Meyer Flaherty dress up as elves from the North Pole. 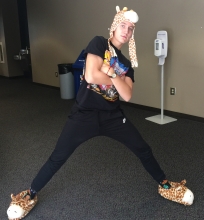 Senior Remy Nicolas displays his love for exotic animals with his giraffe hat and slippers.