During halftime of the homecoming football game, the students who were nominated for court made their way onto the field to find out which of them were the lucky four who 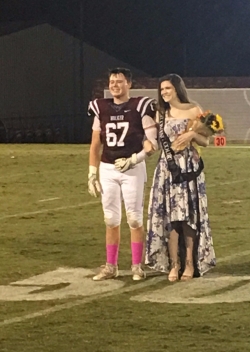 had won Homecoming King, Queen, Prince, and Princess. The Seniors were represented by: Andrew DuBois and Riley Cohen, Randi Epstein and Karl Lee, Grace Mulroy and Hunter Nourzad, and Grace Jarbeau and Brayton Boden. The Juniors were represented by Sofia Paglioni and Willard Scissum, Lauren Moore and Robert Wood, Dylan Alfi and Carlyn Blauvelt, Darius Garvin and Alison Hebert. The Sophomores represented were Alan Hegedus and Brecca Stoll, and Caroline Cohen and Kyle Keegan. The Freshman represented were Hannah Johnson and Tate Harrison, Alyssa Anderson and Devon Godde.The nominations for homecoming court were announced a couple of weeks ago. Senior Riley Cohen said when she found out she was nominated she was in rehearsals for the fall musical and she was “kinda surprised and excited”.

Seniors Riley Cohen and Andrew DuBois walk onto the field for homecoming court.

One by one, the homecoming King, Queen, Prince and Princess were revealed. homecoming King was Andrew DuBois with Riley Cohen being Homecoming Queen. This years prince and princess went to Lauren Moore and Willard Scissum. When asked how it felt to be homecoming king, he said “It feels pretty good! I am super excited about it because being King during senior year, right before I leave Walker, it is kind of cool. It is nice knowing I am going to leave knowing I got something like this which is pretty cool. I definitely wasn’t expecting it, they called out my name and I was like ‘shout out to all my fans’. But everybody who voted for me- that’s awesome because I did not expect this and it definitely made my day, well more than my day, the school year so far so that was pretty cool.” When Riley Cohen heard that she had won homecoming Queen, she said “I was congratulating Andrew on king because he really deserves it and wasn’t expecting to hear my name at all. It took me really off guard and my mouth literally dropped open”.

After the homecoming court was announced, the football game continued. The Walker Wolverines would go on to defeat the Kings Ridge Tigers 42-7.